A downloadable game for Windows, macOS, and Linux

Indie game developer Felicia is blacklisted for suspected spam when her first game attracts hundreds of negative reviews in one day. All of them came from fans of a YouTuber who published a critical video of her game — and this YouTuber is actually her coworker, whom she must work with to develop a major presentation in two weeks. Will the stress turn them against each other, or turn into the sparks of romance?

Line Drop is a visual novel made for NaNoRenO 2018, a month-long game jam themed around the visual novel engine Ren'Py. 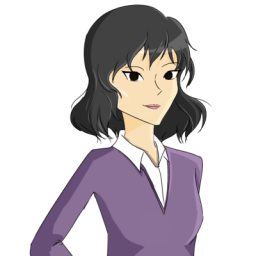 Realistic and practical, Felicia is not much of a dreamer — except when it comes to games. She is quick, critical, and has a hard time embracing chaos or flaws.

Felicia most wants her games to touch their players' hearts, but she struggles to overcome her fear of creating a hated game.

Optimistic and interested, Morgan's tendency to fixate on challenges has made him very good at certain games. He became a content creator because he loves when viewers have fun watching him play games.

Morgan wants to take that to the next level and start livestreaming, but is worried about being harassed for his large burn scar.

The Team Behind the Game

I'm really happy which this game as a game developer because it really is fairly accurate lol. I also liked that it touched on a few real life issues that need to be adressed. Super cute towards the end <3 I'm a big fan!

Thank you so much! It makes me really happy to hear that you enjoyed the game from the developer's perspective and took the time to leave this review. <3

This was a really sweet story, and it touched on some important issues, too. Nice job with this. c:

Thank you for the feedback! I'm glad you enjoyed it. :-)

Why is the plot so similar to the "Let`s Play" webcomic plot?

Most likely because many content creators are fascinated by the power of reviewers, and meeting a prominent one makes an interesting story! I chose games as the subject because I comprehend game dev more than creative fields such as screenwriting.

Looking at the "Let's Play" webcomic (which also seems super awesome!), it looks like that comic is about being neighbors with a streamer, who already has a girlfriend. Outside of the initial premise of content-creator-reviews-game-negatively, the webcomic starts and goes in a very different direction from Line Drop, and the characters seem very different as well.

I sincerely hope that Line Drop's surface similarity to the premise of "Let's Play" doesn't deter you from enjoying either work, since the stories are pretty distinct from each other! (:

Took some turns that we were not expecting, loved it!

Whoa, this is awesome! Thank you so much for taking the time to make a Let's Play of Line Drop -- I really enjoyed listening to you guys' live commentary on it. I've updated the expected playtime after watching this, and had to go check out your video of the "other game about streaming" after you guys mentioned it! (:

Glad you enjoyed it, thanks for the support! 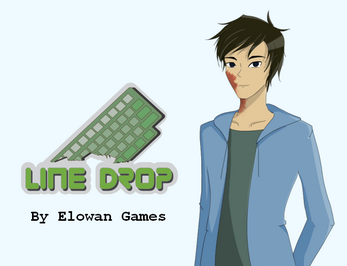 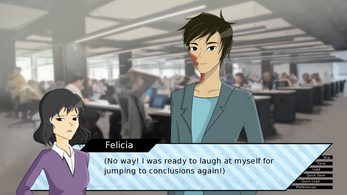 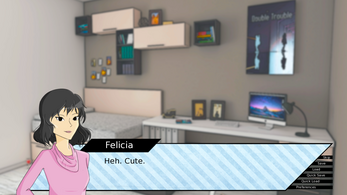 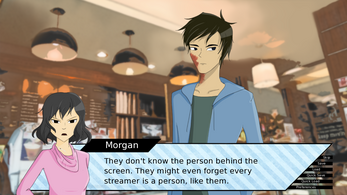